Share All sharing options for: Uncommon Survivor: One World - Week 6

Previously on... UNCOMMON SURVIVOR; a blindside that we will soon forget took Monica out of the game. Now Christina is without any allies.

A little blue bird told me Colton had a twitter account just long enough to get crushed by an unrelenting torrent of deserved hatred. Read about it here.

Colton is so gleeful about how tribal council went, he can't contain his wretched personality while sitting at the same camp fire as Christina. Christina takes it all in stride like a champ. Alicia decides she's got enough courage to bully Christina now, too, and uses her second-nature passive aggression to try to prevent Christina from even sleeping in the tent. May the justice dispensed by the Survivor gods be swift and harsh.

Kat had a dream that Alicia had murdered her. That is a sign, I assure you, Kat. Murder her before she gets to you. Tonight.

Tree Mail alludes to playing wiffleball. That would be cool. You know they'll never do that. You certainly don't play hopscotch in your backyard. Who has a paved backyard? Nobody. And the winner is... not Sabrina's assessment of what is happening with the other tribe's power structure. Oh, the winner was something unsafe with trampolines. The reward is a trip to an ice-cream parlor complete with a jerk (if you're on Colton's team). That was really dumb, I'm sorry. Thanks for making it this far and continuing (fingers crossed).

Everyone's pretty bad at this challenge. It makes me wonder how this went during the testing phase. The best part is Jeff saying his nephew could throw better than Alicia. Jeff's nephew probably isn't even born. His arms haven't fully developed and he still looks vaguely tadopole-ish. (Not tad-Polish, different thing.) Then Jeff says, in all seriousness, "Ice-cream on the line" and a lot of Americans got real serious at their TVs. Troyzan sinks the only really good shot of the game and Salani wins the ice-cream. Colton naturally finds fault with Christina during the challenge despite Jeff's warranted berating of Alicia.

Salani explains the details of how an ice-cream parlor works. Then they eat the ice-cream.

Back at the Manono tribe, Christina is enduring more mistreatment. As usual, this kind if attitude doesn't rub other Survivors the way they like to be rubbed. They like to be rubbed with strategy. Alicia sneaks back over when Christina's finishing her pitch. Alicia does the thing where she tells the person who did the thing in front of her face to do it in front of her face. This is a hallmark of sophisticated intelligent individuals. When Christina informs her that three is more than two, Alicia becomes confounded by the idea of "facts." Then she finishes by trying to walk away, insisting Christina is the one that looks crazy, and that she is done with her... while not walking away.

Colton awakens in the middle of the night, educated individual that he is, thinking that his brain could feel. And who is there to lend a thigh on which to rest his aching head? SAINT CHRISTINA. America, give this woman the popularity money right now. She's a good person who deserves it. She's even reassuring him and telling him it's okay. Colton, terrible and empty person that he is, suspects that Christina would do anything to remain in the game. If that was true, Leif would be giving him a handy at the same time. The next morning, Tarzan informs Colton of the full WebMD article on dehydration and appendicitis. Rather than drink water, he goes into the forest to vomit and die. Unfortunately, Christina falls for his act and carries him back to camp to perform the ancient ritual of the summoning of the medical team. This is what happens when you upset the Survivor gods.

The Survivor Medic, is she briefed on his situation as someone who has said he's literally dying? Either way, she's recommending pulling him out of the game to test him for appendicitis. He asks if he can give his idol to someone. Alicia, his best friend in the game, can only think about where this leaves her in the game. In the best thing of this season, Colton decides to keep the idol while audio of Alicia cursing his name is played over it. She got played. That is what happens when you upset the Survivor gods. 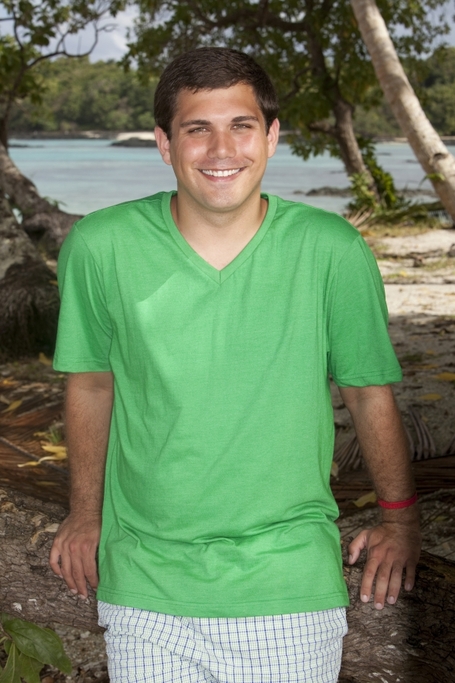 Really long nature sequence. You guys ever watch CBS New Sunday Morning with Charles Kuralt? The nature scene at the end of every episode? It was like that. Go tell a kid about Charles Kuralt. He was cool.

You know how Kat has been staying nourished? Eating her own fingernails. Does that count as cannibalism? Salani is informed that both tribes will be attending council despite Colton's death. Salani contemplates the idea of completely blind vote, while Manono asks each other if they are all friends.

Jonas has finally figured out that all this clan needs is a leader, and he's willing to step up to eliminate Alicia. Leif tries to tell Tarzan about this, but Tarzan insists that Alicia is the genuine character and Christina is the one who will say whatever needs to be heard. This is where you forget everything Tarzan ever said.

Tribal Council Time! Jeff brings on Salani, then Manono. He tells them both about Colton's death. Kat exclaims, "Oh my God!" then asks what that means. Alicia tells Sabrina about Colton's final words. Jeff cranks it up to suspense by suggesting Alicia is lying. Kat, fresh with the knowledge that she has an appendix, is more concerned about hers killing her. And before you know it... MERGE. ONE WORLD, SUCKERS! Oh, and shut up, Tarzan.