Share All sharing options for: Uncommon Survivor: One World - Week 9

Previously on... UNCOMMON SURVIVOR: the women have taken a numbers advantage and threaten to eliminate the men. That decision to vote one of their own off earlier in the game sure has paid off.

Jay had a dream he was shot by a gun. Troyzan and Tarzan compare notes about their disadvantage, but they left out Taryzan, Tarman, and Troyzon. I can't tell if they are making sense or just gesticulating at each other like frenemy homeless guys.

Tree Mail Time! Was Kat's summary of tree mail the best take they had? I guess this is going to be an unsupervised challenge. The game is Snaring the Points Tree. Troyzan takes over as amateur host. I imagine Jeff laughing at him while watching this over hidden webcams. Tarzan is good at this game. Alicia is terrible. It's all up to Sabrina! And... she fails completely! The "red" team wins another barbecue. I wanna know the Survivor barbecue stats. How many times has it happened? What season had the most barbecues? Seems like this one is winning.

Bartender Troyzan is on a mission to get the ladies drunk. Then we're treated to Tarzan's commentary on the architectural value of the crustaceans that are being cooked on a fire. While the other wander around, Jay and Kat come up with a plan to vote out everyone else before themselves. Good plan.

Kim and Chelsea have emerged as the evil masterminds at this point in the game. The next to go should be Jay or Troyzan, but Chelsea's already given her soul to Jay and he'd be on the jury, so she doesn't want to risk being a dirty liar. The chat ends with a pep talk from Alicia about taking your heart out of the game. What are these wise words coming from her for? Has to be a coincidence...

Jay and Troy still think they are going to the end together... well, except for Jay. He's banking on Kim and Chelsea. This is a pretty nice circle of mistrust. Jay tries to convert Kat to his side, but he doesn't get a firm answer. Somehow Kat is good at the social game? That was pretty smooth. I'm impressed. Jay gathers the girls around and tells them all they're getting rid of Alicia and Christine next. None of them tell him no.

Kim tells Alicia about this false plan to eliminate her. Troyzan suspects their pow-wow to be a strategic one. While fetching another tree mail, Jay tries to feel out Troy's intentions for the challenge while also reassuring him based on his trust in the women.

Immunity Challenge Time! Whew, Jeff's back. A Jeffless episode would be a terrible thing. It's a You Can't Do That On Television Endurance Challenge. If you lower your arm or say "I don't know" you get slimed. Before Jeff can even finish the sentence about the challenge being "on" - Tarzan is out. Before Jeff can offer two cookies and a glass of milk, Christine drops out. What the hell. Sabrina opts for the cookies and milk. To up the ante, Jeff offers cupcakes and milk. Kim and Kat accept the offer. Alicia tells Chelsea she'll let her win because she wants the next Jeff offer. As soon as Jeff brings out the next thing, a covered plate, Alicia calls dibs and jumps out of the challenge. She gets a bowl full of candy and chocolate. After a long stretch of no offers, Troyzan lose his balance. Jeff brings out a tray of chicken wings and beer, the best offer yet, and Jay jumps on it and begins eating without a word. It's just Leif and Chelsea left. Chelsea tells him he'll be less of a threat if he quits. When Jeff comes out with the next food offer, Leif asks Chelsea if she's super serious. She convinces him to jump off and eat the burgs. Chelsea wins immunity.

Chelsea and Kim plan the elusive split vote to get rid of either Jay or Troyzan. Jay approaches and demands to know that it's not him. Of course it's not, buddy. You're in a great spot. Troyzan's paranoia is dead on and he's suspecting Kim is lying to him. Jay doesn't think Troy's worries are valid. Troyzan tells Tarzan to tell Christine to come talk to him, which is a great plan because Tarzan doesn't know anyone's name. Troyzan reveals his idol to Christina... the real Christina because Tarzan chose the correct one. Things are going to get close to becoming almost interesting.

Tribal Council Time! Jeff wastes no time pointing out that the men have lost control. After the Immunity Challenge was when the conspiring truly began. Everyone's been paying attention to everyone else's pants, pockets, and packages. Alicia notices that Troyzan's wearing his carryin' shorts, not his swim trunks. Boom. Game over, buddy. Alicia just nailed you to the wall. Alicia! 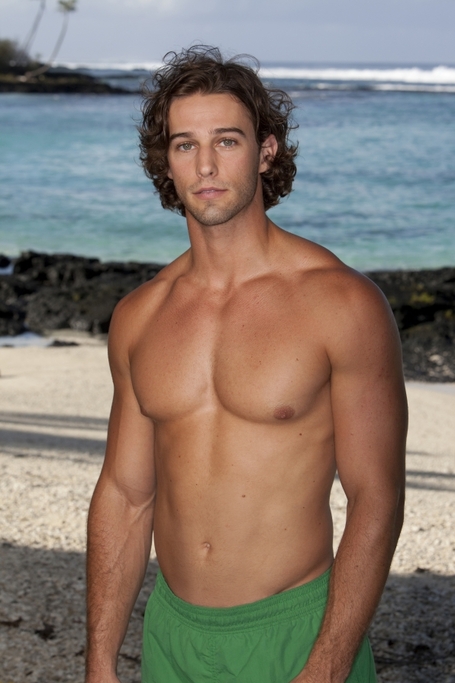 Next time: Despite all his rage, Troyzan's still just a rat in a cage.