Share All sharing options for: Uncommon Survivor: One World - Week 11

Previously on... UNCOMMON SURVIVOR: we've been miserably making our way to the end. Troyzan is the outlaw that nobody really likes. Especially the women, who are just towing the party line until they have to start eating each other.

This season, you guys. This season is trying to wear me down. It's like all these people aren't even going to be horrible in any spectacular fashion. They're just going to be boringly bad. It would be excellent if there was a "None" option for the fan favorite vote. All the remaining Survivors would surrender their winnings to us, the viewers.

We're just cruising towards the inevitable now; will Troyzan win immunity or will he not, and get voted out? It's not like he's going to split up the women. Tree Mail hints that they're going to split up. Oh joy.

Reward Challenge Time! It's trivia, which makes for mediocre viewing (as far as challenges go) and even worse recap reading. Sorry everyone. It's really not my fault. It's that damn Mark Burnett. Christina is the one who doesn't deserve to be here. Kim is the one everyone trusts with their life. Troyzan gets burned due to popular vote. Tarzan says a turbonerd thing. Kat most needs a wake up call in life. Tarzan's effigy is burned next, followed by Chelsea. Troyzan is the biggest poser. Sabrina does the least for the tribe. Kat goes up in flames, then Sabrina. Kim is the one everyone likes most, which causes Christina to burn. The one nobody wants to see ever again is Troyzan, and Kim wins because everyone likes her best. She chooses Chelsea and Alicia to go with her. Kat's hurt by the choice and Troyzan's dishing out more reality.

The leading ladies enjoy a helicopter ride and can only compare it to a ride and a rollercoaster, you know, things affixed to the ground. The ladies enjoy a picnic and Kim starts to have second thoughts about her choice.

Kat is having a hard time grappling with the reality that she's not with the In Crowd. Given enough time, I think Troyzan can break her. He's a pretty good button pusher, all told. Sabrina tries to restore faith in Kat but Kat can't really express any emotions without crying. After Kat is away, Sabrina polls Troyzan and Christina for alternate plans, just to see where they're at.

Kim returns and takes Kat aside to chat. Major sideboob blurrage. Kim explains to Kat that it's really complicated and she shouldn't be mad because it's complicated.

The next day, during a storm, a wild pig wanders into camp. Then it's Lord of the Flies. PETA is gonna be real mad with this episode. We're shown Troyzan hating on the whole experiment while leading it.

Suddenly it's Immunity Challenge time, so I guess they didn't get the pig. The challenge is to get all greasy then toss a ring. To made things more sensual, Chelsea and Alicia rub up on each other. Kat lands her first ring and does a dance. Next is the battle of the Zans. Tarzan takes a long time and eliminates Troyzan. Well, I guess that's that. Christina shows us her greased up butt as Kim metaphorically penetrates it. Kat and Chelsea begin round two, Chelsea advances. Troyzan is noticeably standing with his back turned to the game. Tarzan takes a year to get down the course and loses to Kim. Kim and Chelsea start the final round. They're the two best, why not. Kim takes home the win. Well, not home home.

When they return, the pig is still there. That'll do, pig. The plan is to split the vote on Troyzan and Christina in case Troyzan has an idol. With Troyzan's words eating away at her, Kat wants everyone to know that she's actually been the one in charge all along. Sabrina plays it with an eye toward the end game by telling Christina that Troyzan's going home; some of them are still voting for her, but she's definitely not going home. Alicia diagnoses Christina with some kind of intelligence-deficiency syndrome, because she's an expert. Christina tells Troyzan about the vote-splitting plan, which gives him all the information he needs to launch a counter-attack.

Tribal Council Time! Pretty standard talk. Christina's not sure. It's funny that she thinks she's lucky she's here because nobody thinks she deserves it. Troyzan seeing through the lies. It seems like whatever alternate plans they had are broken up now that everyone just hated on Christina. I will say this about her, she's probably a really great person in real life because reality TV is where awful people thrive. None of it matters anyway, Troyzan gets like almost all the votes. 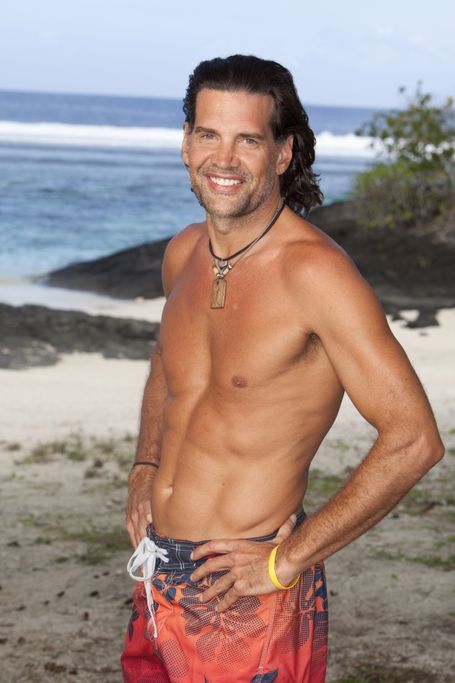 This is what came up when I googled, I guess it's him. via www.cbs.com

Next time: Will the women implode before they eliminate Tarzan? That's pretty much it. Thanks for reading.