Share All sharing options for: Uncommon Survivor: One World - Week 13

Previously on... UNCOMMON SURVIVOR; Kat got all care mad about the reward thing and made too many waves. She got elim'd.

This is it, the second to last episode. Your pedantic friends would say "penultimate" but they're a bunch of weenies. Let us bask in the glory of this system which makes few rich and enslaves a great many for our minor pleasures. Hooray reality television programming. Hallowed be thy game.

Tarzan has dreamed up some crazy scenario wherein he becomes one of the final three. Does Survivor offer any followup care like Hoarders or something? Alicia is turning to Tarzan for reassurance. What fresh hell is this?

The game appears to be sitting at three vs. three; the good girls vs. the misfits. Chelsea and Christina talk it up, which starts a gossip fire that consumes the other ladies. Kim's all worried because she's been playing both sides. Check out this minor drama I'm brewing. You'll be able to drink it down with this low-calorie broth I've made from a boiled celery stalk.

Reward Challenge Time: Afternoon on a yacht if you get all dizzy and carry your frisbee to the thing. This game would be really cool if they integrated drinking alcohol. Shot shots shots shots shots shots. Chelsea solves the thing first but fails the combination twice. Alicia is next, then Kim, but Chelsea figures it out by then. She chooses Sabrina and Kim because Sabrina deserves it, but Kim is her friend more than Christina, so she gets the shaft. The ladies have a nice time with the reward. Showers, champagne, the wind in their hair. What a dream. With Kim being waited on, she feels like herself again. Hail Capitalism.

Alicia is mad about Chelsea's reward selection. The Remainders vow to vote out Chelsea. Or Kim. Someone. Tarzan tries to pry his way into the final three with some convoluted plan. Meanwhile, Kim is over-confident. Or maybe she's not. Sabrina thinks Kim has this magical power. We'll see how that works out without the power of alcohol.

Tarzan decides today is the day he's going to seize his carp of the diem and make rice his own damn way. Christina and Alicia are naturally worried about this. Alicia and Kim compare notes and team up against Tarzan. Looks like his vine has run out. Christina wanders over and now she's in on the plan, too.

Tarzan congratulates Alicia by calling her the B-word. It doesn't go over well. Alicia's butt has been blurred out like four times by now. The network's gotta fill us in on what we've been missing there. Chelsea is upset that Christina, who is like the coolest, might last longer in the game than she has. Alicia and Tarzan pal around about their plan. Basically, everything is up in the air, except for voting for Alicia.

Tribal Council Time! Sabrina talks. Tarzan talks. Sabrina talks again. Jeff makes Tarzan talk some more. He says words, including "afoot", then he talks about the poop clothes he's been wearing, as well as Kat's panties on his head. Kat starts crying. Chelsea and Christina exchange daggers about their reward pact, and Kat calls them bitching. 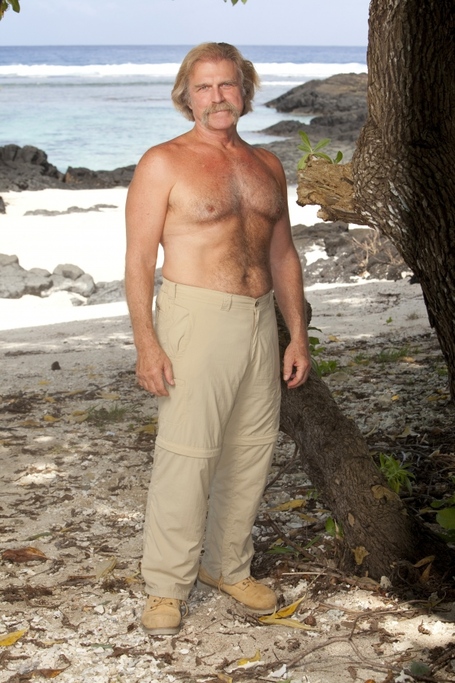 Next time: It's time to give this season a viking funeral. All women, all the time. Try to stay awake.