Share All sharing options for: Uncommon Survivor: One World - Week 12

Previously on UNCOMMON SURVIVOR: A systematic elimination of the men has left the game in charge of like... two boring chicks. Nobody else has a shot. Chelsea and Kim are like the same person, too. This could go down in blogging history as one of the lamest Survivor seasons ever.

Week 12, huh? If memory serves me correctly, and it usually does not, next week will be thirteen weeks, and that means the finale will be the following Sunday. It can't come soon enough. This season became a lame duck after Colton nearly died of eating poop. Now that I've got you all pumped up to read this recap, let's go!

Kat tells everyone Troyzan's parting words of wisdom. Somehow when they are coming from her, they are less dramatic. Alicia thinks she's the most powerful player left in this game. Like, maybe if it was up to me... but it's not.

Tree Mail is sponsored by Sprint; the little network that couldn't. Now it's time to watch an ad from a 2nd-rate phone manufacturer and a 3rd rate cell carrier. Yeah, you could say I know a little bit about the smartphone industry. *fogs and polishes finger nails*. I don't really wanna talk about what Sabrina said about Tarzan's martial status. You can, but I'm not.

Reward Challenge Time! It's one of those maze things. Jeff names the smartphone as the Evo 3D from Sprint. That's an HTC-manufactured phone for everyone keeping score; the company that finished third last quarter. (I have a feeling that person who wanted me to write about their AT&T vs. Verizon oligarchy thing is going to email me now. Too bad. Unrelated content.) Kat and the cousin she's making my uncomfortable with win the challenge. She chooses Kim and Alicia to go with her because she genuinely likes them as people. I don't have anything snarky or funny to say about that, that's a cool thing to do. (Even if those people are people I'd never hang out with. Ever, ever.) Hangin' out with the bros (or... chickbros) is cool.

Sabrina is all mad about losing and thinking up reasons other people should have gone. Suddenly it's Kat's fault that Tarzan has been married forever and Christina's dad is towards the end of his mortal coil. Chelsea is bitter about this, too. Chelsea says that Kat is "a smart person to take out next" and it's wrong both the first way you hear it, and the second. When the group reunites, Kim and Chelsea compare notes. Instead of Kat, it's probably going to be Sabrina.

Immunity Challenge Time! Dudes (and possible Dudettes)... I don't even know what to call this. Bars. Ropes. Leaning. Surprisingly, Sabrina drops out first instead of Tarzan. Then Tarzan complies with the Laws of Frailty and Oldness. Alicia quits next; eliminate her! Christina quits unceremoniously. After an hour, Jeff does the thing that makes this harder, I guess, and Kat is determined to win simply because Kim has won them all. She begs Kim to let her win, but she can't hold on. She's really pissed about losing. I honestly thought Kat's unbridled selfishness would have let her win out this time, but no.

Now it's down to Sabrina, Alicia, or Kat. Tarzan is apparently forgotten. According to Kim, most people are voting Sabrina because she's smarter. Or maybe it's Kat because she's selfish and doesn't deserve to be in the final three.

Tribal Council Time! Kat talks about making the hardest decision in Survivor: choosing who gets to see their family on the reward. Sabrina think Kat made an honest decision, but a poor one. Next, Kim is dumping on her. Keep in mind, Kat made the best decision for her life, it's not her responsibility to worry about everyone else, who volunteered to leave their old, dying loved ones. It's basically a full-on Kat-dumping party because she's outnumbered by bad people. "Haha, look at her under the bus." Kat doesn't even care that she might be blindsided. I think she just went from the bottom of the barrel to my favorite. Thanks, editing people, for making me dislike her for the whole time.

Voting Time! Sabrina (Kat's vote), Kat, Kat, Kat, Kat. Note that nobody could make eye contact with her. Shameful. OMG they even made her cry. 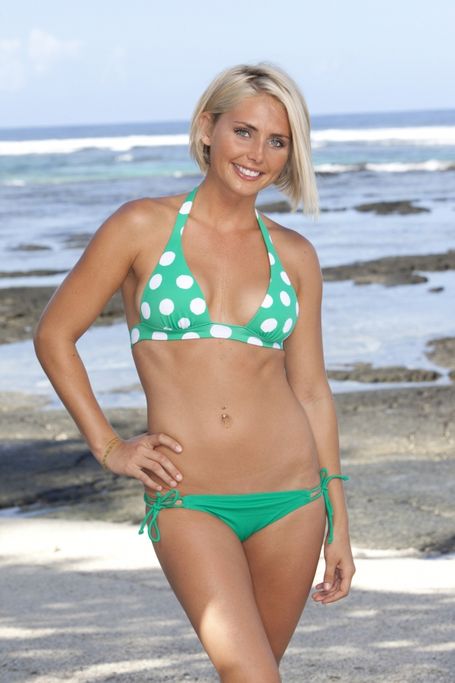 Not smart at all... but she won me over in the end. Best quote: "I'm eating my finger nails!" via www.cbs.com

Next time: Tarzan is really bad, old, smelly, and unpleasant, but this could be his saving grace.